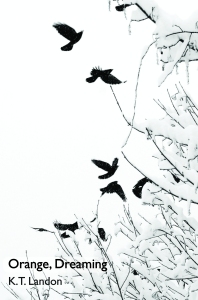 Furious beating. In many ways that is what great poetry is, and that is what we find in KT Landon’s marvelous first book. Furious beating because poetry is always fighting against a world that is not what we thought it could be. And so here, it is inevitable death that seems at first to haunt the poet, from the Dead who occasionally make their cameo appearances to reminders to the poet’s husband about mortality, and a kind of worry, a wondering “if words could save anything from anything.” But the plain and marvelous fact is that simply facing it is a way of understanding and then transcending it, and this Landon does superbly in poems that rise like the birds in one poem “mastering the air—a furious beating / of wings and hearts, an insistence  / that gravity is not the last or only law.” It isn’t, as we learn here, and that is the essential gift this book brings.

~Richard Jackson, author of Traversings (with Robert Vivian) and Retrievals

At once colloquial and elegant, Orange, Dreaming illuminates questions of love, the afterlife, the nature of God, and the nature of knowledge with refreshing clarity and never a hint of abstraction. It offers instead crisp, surprising gestures, gathering elements of childhood obsession and memory, along with daily images—vegetables left in the fridge past their prime, an effort to free a crane fly from the dishwasher—into meditations that bloom with intelligence and carry the reader gently, often with humor, always with empathy, into realms philosophers and theologians inhabit more doggedly. It is a true pleasure to ride the waves of observation, image, and insight in this gem of a book.

~Leslie Ullman, author of Library of Small Happiness (essays) and Progress on the Subject of Immensity (poems)

One thought on “Orange, Dreaming–K.T. Landon”